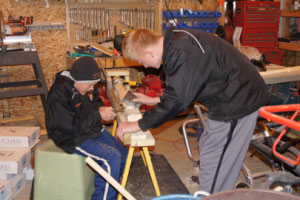 The first bat made by Delano Bats was in March 2012. As 8th and 7th graders in Delano, Minnesota, Peter and Andrew Kruse were trying to keep busy during an unusually rainy and cold March spring break. Peter (standing in picture at left) had long wanted to make his own wood bat. After watching several YouTube videos, Peter and Andrew built their own drill powered lathe (below right). They cut out their first bat using a screwdriver and a chisel. 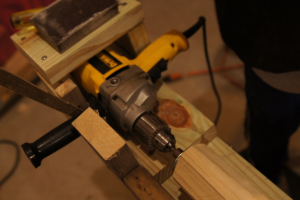 Since then, Peter has steadily learned more about the industry and the science of making a high quality wood bat. We continue to learn, with much thanks to the countless people who take time to help Peter.